Please support the Stan Samuelson Scholarship Fund
​STAN SAMUELSON SCHOLARSHIP FUND GIVES FIRST TIME AWARDS
In April of 2020, one of our community's champion allies, Stan Samuelson, lost his battle with Covid-19. In addition to his many other community activities, Stan was a long-time ally of the LGBTQ Community. Since 2017, he served as Cape Cod PRIDE's liaison to the Cape's Gender Sexuality Alliances (GSA's). In honor of Stan's life and work, Cape Cod PRIDE has created the Stan Samuelson Scholarship Fund (SSSF). Many of Stan’s friends, relatives and former co-workers have generously honored his memory enabling us to offer scholarships to high school students on the Cape and Islands who have demonstrated a commitment to their communities, promoted LGBTQ equality, and aspire to work toward social justice and human rights in the future.

We are pleased to announce our first-time scholarship awards in the amount of $2000 each to two students who share Stan’s dedication in promoting LGBTQ equality in their community. The 2021 recipients are Joseph F. Cywinski, Jr. and Madeline Chronister, both from Martha’s Vineyard Regional High School. 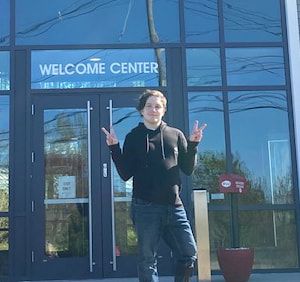 While in the Cub Scouts and later the Boy Scouts, Joseph developed his sense of responsibility to and concern for his community.  In addition to his high school studies and part time job, Joey was part of a team that confronted the school administrators and school committee about changing the traditional gender-based cap and gown policy for the graduation ceremony.  After almost a full year of lobbying to change its antiquated binary color scheme- one that dictated that all boys wear purple and all girls wear white- the school finally allowed students to choose whichever color they wanted. As an active member in his GSA, he contributed in a variety of ways including promoting and celebrating Trans Visibility Day, fund raising, participating in pride parades, and collaborating with other organizations on other events.  He also helped facilitate changes to the school's bullying policy to be more sensitive to LBGTQ+ students' concerns.  Joey appreciates the support provided by his GSA in allowing his self-expression.  His vision is for the passage of equality acts enabling individuals of all ages, genders and sexualities to freely express themselves.  Joey plans to major in history at Bridgewater State University.

Madeline’s dedication to the LGBTQ+ community began in middle school when they began meeting other students like themselves and has grown since then. They are among the top students at their school and have consistently earned strong grades even with the challenges of remote learning. In line with their interest in horticulture and working on a farm, Maddie was named the student representative for the CTE Horticultural Program. Maddie joined the school’s GSA in their first year of high school and has played an integral role in that group.  They created publicity for the group’s events, helped in fund raising, co-organized an Island-wide Queer Trivia Night for students as well as other community members and represented their school at Boston Youth Pride.  They took on a leadership role in the GSA as a student co-facilitator since their junior year and was a member of the National Honor Society in their junior and senior years. Maddie wishes to continue to reach out to the LGBTQ+ community and someday organize an Island Pride event.  Their plan is to attend the University of Massachusetts at Amherst, Stockbridge School of Agriculture, to study horticultural science.
SAMUELSON SCHOLARSHIP FUND
c/o The Cape Cod Foundation
261 Whites Path, Unit 2
South Yarmouth, MA 02664
stansamuelsonscholarshipfund@gmail.com
December 2021
Re: Now managed by The Cape Cod Foundation
Dear Friends:
Stan Samuelson was a tireless ally of the LGBTQ Community, and served as the GSA liaison for  Cape Cod PRIDE for several years. Tragically, on April 21, 2020, Stan lost his life to Covid 19. Prior to volunteering for Cape Cod PRIDE, Stan had worked as an engineer, social worker,  teacher, coach, and GSA advisor, and had volunteered for many community organizations and  causes. Cape Cod PRIDE decided that the best way to honor this man, who had done so much  for so many others, was to establish a Scholarship Fund in his name.
Each June (PRIDE month), the Stan Samuelson Scholarship Fund (SSSF) Committee plans to  award scholarships to seniors graduating from a Cape and Islands high school, who plan to  continue their education, and like Stan, are committed to promoting LGBTQ equality through  community service. The SSSF Committee is very grateful to Cape Cod PRIDE for managing the  Scholarship Fund since 2020. Although the SSSF Committee will continue to raise money for the  Fund, and select the scholarship awardees each year, the SSSF will now be managed by the  Cape Cod Foundation, which manages many scholarship funds.
Your past support enabled us to award $2,000 Scholarships in June 2021 to two outstanding  Cape Cod and Islands high school seniors. Please help keep Stan's legacy alive by continuing to  support this Scholarship Fund. If you have already made a donation for the 2022 Scholarships – Thank you! Please make note of the new ways to donate to the Stan Samuelson Scholarship  Fund in the future.
HOW TO DONATE TO THE STAN SAMUELSON SCHOLARSHIP FUND
Electronically: Go to
https://capecodfoundation.fcsuite.com/erp/donate/create?funit_id=2751
By Snail Mail: Mail check, made payable to Stan Samuelson Scholarship Fund, to:
The Cape Cod Foundation
261 Whites Path, Unit 2
South Yarmouth, MA 02664